May 2014 –  The Premiers Sustainability Awards Queensland 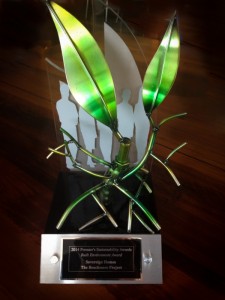 The Beachmere Project partners are proud to announce that The Beachmere Project is this year’s winner of the Premier’s Built Sustainability Awards – Built Environment category.  Announced on Friday 30th May 2014, the project was the only residential property to take out one of these prestigious awards in 2014.

The Premier’s Sustainability Awards recognises the achievements of Queensland communities, schools, individuals, businesses and industries in adopting sustainable business practices. In 2014, the awards attracted nominations across nine categories ranging from some of the state’s biggest infrastructure projects to small, innovative and game-changing enterprises.

Over 450 people attended the awards presentation dinner at the Brisbane Convention and Exhibition Centre on Friday 30 May 2014. The Queensland Environment and Heritage Protection Minister, Andew Powell said this year’s awards attracted 120 nominations across 10 award categories, The Bechmere Project being the only residential winner! ….read more.

This award is given to an organisation that has created innovative sustainable business opportunities in urban design, construction, waste minimisation and development.